productions: past and future 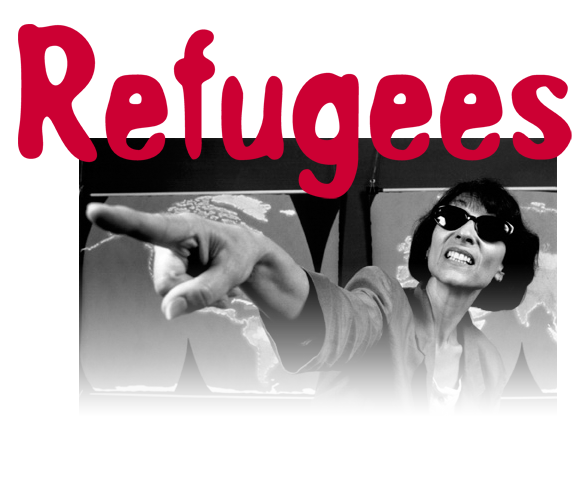 The germ for this play began over ten years ago when I started teaching English as a Second Language to refugees and immigrants. As I listened daily to stories of war, deprivation, humiliation, and institutionalized sexual oppression, I discovered not only that I knew nothing of, and could never have dreamed these lives, but that many of us in America are bound together as refugees of varying degrees and share a sense of rootlessness, and that America as a nation of refugees forgets after one or two generations and needs to hear and re-remember. We forget because our families chose amnesia or silence, and silence creates amnesia. It is this silence that most disturbs me and that I address with this play.

The characters in Refugees represent a compilation of many stories told to me by many people over a five year period. Any resemblance to particular individuals is purely coincidental.

or call the Refugees office at
(818) 904-1194
or email me at
stephanie@refugeestheplay.com

Most heartfelt thanks and gratitude to Anita Khanzadian for her direction, script development, commitment and friendship; to Jill Remez for getting me to finish this script; and to my husband Rick Friesen, without whose love, work and encouragement this project could never have seen the light. Much appreciation also to Leslie de Beauvais for her continued support of this project, The Los Angeles Department of Cultural Affairs, Chris Gockel, the patron saint of printing, Jennie Ventriss, The Los Angeles Writers Bloc, Susan Merson, Bob Neches, Julie Davis, Diana and Bernadette Hale, Sandra Stanley, Interact Play Development Lab, Neal Marlens, Carol Black, Ella Naroditskaya, Zara Kulakhchyan, Jilla Benyamin, The English Department and Department of Humanities, California State University, Northridge, Linda Griffith and Peggy Renner of Glendale Community College, and the students of Levels 4,5,6, and teachers everywhere.